Keeping elderly parents safe during any type of disaster requires special planning. Whether it’s natural, pandemic, or manmade, be ready before an emergency strikes. 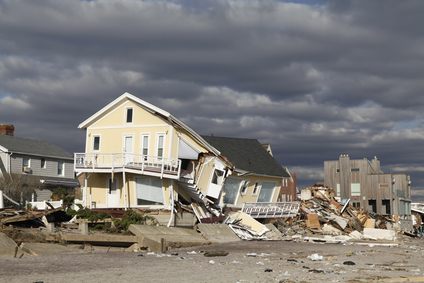 When Hurricane Sandy devastated the New Jersey coastline in 2012, I was living in South Jersey, not far from Philadelphia, caring for my 92-year-old dad. We were about an hour and a half from the coast, so aside from some heavy winds and rain, were far enough inland to not be badly affected by the storm. A few days after it was over, I read a disturbing news story about an 89-year-old woman in Pennsville, NJ, suffering from Alzheimer’s disease, who refused to leave her home during the storm. Early on the day the storm hit New Jersey, her paid caregiver took her to a nursing home for safety before leaving to take care of her own family, but the woman didn’t understand why she was there so became disoriented and combative, eventually walking out. The staff took her home, and told NBC news later, “We got her something to eat and handed her a flashlight. She said, ‘Why am I going to need my flashlight?’” Despite her clear cognitive impairment, she was deemed legally competent to make her own decisions, and the staff couldn’t force her to stay in a safe place. She weathered the storm alone, and made it through safely, despite losing power for a time.

My dad’s dementia was further advanced than this woman’s was, but I remember one night when we lost power for a while. He was sitting in his recliner watching TV when the power went out. I got him a flashlight and lit some candles around the room. He asked me several times why I turned off all the lights, and each time I explained to him that the power was out. He would accept that for a minute or two, then pick up the TV remote and try to turn on the TV, then try to turn on a lamp, then ask me again why the lights were off, and tell me to call the power company. I finally convinced him to go to bed and when the lights came on a few hours later, the radio next to his bed started blaring music and all the lights came on. He was so angry with me and accused me of “playing games” with him. I was able to calm him down and eventually he fell asleep, but it was a long, sleepless night for me. I can’t even imagine how he would have behaved if we’d ever needed to evacuate for an emergency. No doubt he’d have insisted on going back home no matter the danger. Once there, he would have had no idea what was happening and, if alone, would no doubt have been frightened at not knowing what was happening.

We’ve all heard newscasters urge everyone to have an emergency plan in place for events such as hurricanes, tornadoes, earthquakes, and man-made disasters, but few people I know actually have an emergency plan, let alone a stockpile of emergency supplies. For the elderly, these preparations are more than a “nice to have” idea that is put off because we don’t think it will happen to us. I’m as guilty as any other caregiver in this regard—I had gathered a few items and bought a few gallon jugs of water, but if we’d had to evacuate on short notice? Houston, we would have had a problem.

So what can you, as a stressed-out, overworked caregiver do to prepare? Here are three steps to get you started.

Do your parents live in earthquake country? Tornado alley? Close to a high-fire danger area? Different types of natural disasters can require you to respond in different ways. Hurricanes, for example, usually give you enough warning to evacuate in advance, while earthquakes happen without notice.

Knowing what type of emergency you may face with your parent will help you prepare. No doubt you’ve heard this before—usually after a disaster occurs, news stations emphasize how important this is. Ready.gov has a basic list to get you started. For convenience, keep your supplies in a “go bag” so you are ready if evacuation is necessary—and everything is in one place if you are able to shelter in place.

Step 3: Customize Your Supplies for Your Parents’ Needs

Elderly parents may need special equipment to function easily, especially in stressful situations. If an emergency requires evacuation, it can be easy to forget items such as walkers, wheelchairs, medication, incontinence supplies, and other items to keep them comfortable. Make a list of these items and keep it on top of the items in your go bag so you don’t forget them in the stress of an evacuation order or other emergency.

While this is by no means a comprehensive list, taking these steps will help to keep your parents safe in the event of disaster.